I have often pointed out how much of the documentation utilized to support the official history of Christopher Columbus is unreliable. The fact is that forgeries were created over the last five centuries, documents were modified, details were invented and facts were censored, discarded and ignored. All of this has been presented in my various books on Columbus. I have succeeded in proving that the Last Will of 1498, also called the Mayorazgo de 1498, was never written by Columbus but fabricated during the Inheritance Lawsuit for the Dukedom of Veragua (los pleitos sobre la sucesión del Estado y Ducado de Veragua) initiated in 1578 and finally put to rest in 1609.
The lawsuit for one of the greatest inheritances ever left, lasted 31 years. In 31 years a lot of forgeries can be created by those eager to benefit from them. There are many reasons as to why forgeries are created, money being the most important reason.
I have already shown how the Genoese publications actually fooled the historians with the Assereto Document by cutting out the blank pages and joining together the written pages as if they were continuous, which they are not. Furthermore, there is no way to stitch the Assereto pages together as a single document. If you do try to stitch it together the pages do not read correctly.
When I began to claim in 2005 that the Assereto was a blatant forgery by the City of Genoa to influence history, I was then told of this short quote from Paolo Emilio Taviani, - still used against me today by those who never read my books - as to why the document is authentic:
"It is important to bear in mind that at the time when Assereto traced the document, it would have been impossible to make an acceptable facsimile. Nowadays, with modern chemical processes, a document can be 'manufactured', made to look centuries old if need be, with such skill that it is hard to prove it is a fake. Fifty years ago this was still impossible."§
Today I am posting here two documents which I declare are forgeries. The "original" forgery is a supposed letter from Columbus to the Genoese Bank of St. George dated 1502. I have not had the opportunity to go see this original in person, but simply by what the text itself says, as well as by the format of the signature, I declare that Columbus could never have written this letter. Someone in Italy forged this letter sometime after Columbus died in an attempt to connect him to the Bank in Genoa.
The "copy" is clearly a forgery since it is almost indistinguishable from the "original" housed in Genoa. Simply by comparing both, it is obvious that one was copied from the other with the intent to fool someone and everyone into accepting that Columbus had written it.
Look carefully and you will note that all text lines break on the same words, that all strokes of the pen are copied exactly and how the missing text in the original, due to the holes in it, is blank on the copy.• 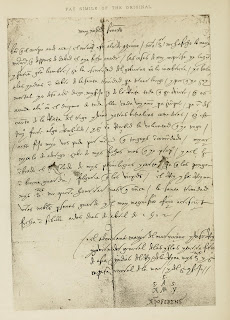 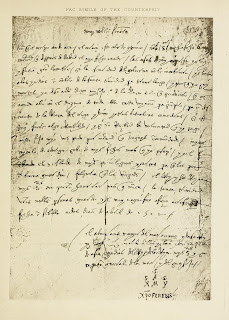 Strangely enough, the discoverer, who was supposed to have been born in Genoa and was supposed to have lived there for half his life, wrote this letter to the Genoese Bank not in Genoese but in Castilian. Even stranger is that we are supposed to believe that the Bank's reply, one addressed to Columbus's son the other to Columbus, instead of being written back in Castilian, were written in Genoese, instead.
The following image shows a letter dated December 8, 1502, that Columbus never received. No letters from the "prestigious" Bank of St. George were ever found in the Discoverer's Archives in Spain, but are found, instead, in the Bank's own archives! Talk about a case of severe miscommunication, the reply is written in the wrong language and found in the sender's hands!

Now comes the part where I prove how Paolo Emilio Taviani and all his followers are wrong about forgeries in saying and accepting that it was impossible for the Assereto Document to have been forged. Take a good look at the two images of the letter above and see if you can tell the difference between them. The two documents are so close to one another that if one had not been done in vellum and if the other did not have the two holes punched in the middle, it would have been impossible to tell which one was written first.  The "original" with the holes through it came to light in Italy 1829 and has, since then, been housed in Genoa. The "copy" came to light in October 1883, while Henry Harrisse was in Paris. The "copy" was then offered for sale in New York and Chicago in 1887, as told by Mr. Harrisse. The letters are such perfect copies that when you take one and place it on top of the other, they match up almost perfectly, as the photoshop image below shows. (Try it yourself by downloading each letter.)

This seems to me that this could only have been done with some sort of direct tracing which would have been impossible to do if the "original" was held in the custody of the City of Genoa since 1829. It seems to me that, if one is in vellum and the other on paper, that it would be easier to trace with the paper over the parchment than vice-versa. In such a case the "copy" would have to be the letter held by the City of Genoa and the "original" would be the vellum. Possibly the vellum copy forgery was created first, I don't know how translucent parchment can be in order to trace over another document, but either way, the important thing here is that an exact forgery was done in Italy of an essential document that is used to support the "official narrative" of the peasant wool-weaver and, thus, again Taviani was wrong in saying that forgeries were impossible to create in 1904.
If such an exact forgery could have been done before 1883, imagine how easy it would be to forge a stand-alone document, one that did not have to match any other document, as is the Assereto?
Needless to say, historians the world over have been fooled for centuries by the many forgeries and adulterated documents and have "agreed" to a history now proven to be a fairytale.
New research continues to reveal more and more lies in the history books relating to Columbus and his "discovery" of America. We have not yet uncovered all the lies but at least we have opened the door to reality and begun to shed some light on those old dusty documents, so long held as the "proof", but which turn out to be only proof of a misled world which accepted that the great Admiral and Viceroy had started his life as the poor peasant wool-weaver from Genoa.
Along with this forgery, I am inserting another type of forgery. That is the forgery of documentation, either by evil intent, by good intent or by ignorance. Forgery of documentation occurs when a document is modified from its original state or copied with wrong information. The case I present next is important because it relates to the first English translation of Peter Martyr's text on the Discovery of America. The reader will note that Peter Martyr, writing in Latin, always called the discoverer by the correct Latin form Colonus and never Columbus. As I have explained many times before, the name Christopher Columbus is not the correct name of the discoverer. His correct name in Spanish is Cristóbal Colón which gives us Christopher Colonus in Latin, while the Latin Christopher Columbus would give us Cristóbal Paloma in Spanish, Columbus/Paloma can never equal Colonus/Colon. Here you can see an explanation of how the name Colon (from the Greek κωλον meaning Member) began to get corrupted, first to Colom (Catalan meaning Pigeon) and then to Colombo (Italian meaning Pigeon) and finally to Columbus, which means Pigeon in Latin.
I can't put into a blog article the whole of 700 pages of my first book nor KOLUMB. Historia Nieznana (COLUMBUS. Unknown History), however, the important thing is to remember that the name Colonus was wrongly corrupted to Columbus and the following image from Richard Eden book shows this forgery of the documentation in action.

Richard Eden inserted into his translation the following text which is not part of the original text  written  by Peter Martyr. However, Mr. Eden does not bother to alert the reader that he had taken it upon himself to add this text: (otherwise called Columbus) A gentilman of Italy, borne in the citie of Genua. Richard Eden added this information without a reference as to where he got it, trying to put words into  Peter Martyr's mouth. However, it can be safe to say that Eden followed rampant rumors and innuendo and not any official document or statement issued by the Colon family. The Colon family was intentionally hiding the true identity and birthplace of Christopher from the public eye.

Inventions like the one Eden implemented are rampant in the Columbus documents, chronicles and translations but have no factual basis, as is excruciatingly detailed in the three books that I have already published in Portugal, Spain and Poland. We should learn to call the discoverer by his correct name, which was Cristóbal Colón, that is the name Colon has been continuously used until today by his thousands of descendants, and we must systematically denounce the false name of Christopher Columbus because it is the name of an impostor fabricated by unreliable and false Italian documentation that does nothing but add to the confusion. The fact is that, with so much false information, we may never know the true identity of Colon without a wide ranging DNA study, which we hope to be able to perform in the upcoming years.
-------
§ Christopher Columbus: the grand design, Taviani, Paolo Emilio.
• Christopher Columbus and the Bank of Saint George, Henry Harrisse, Chiswick press; C. Wittingham and co., London, 1888
www.1492.us.com
Posted by Cristóvão Colon at 11:29 PM