Try to visualize everything you were told about that epic 1492 voyage of Columbus and his discovery of America? His novel idea of opposing a flat earth theory with the belief that the earth was truly round: The trials and tribulations of convincing a court and a scientific committee to sponsor him on a fearless sailing voyage into the dark unknown: The weeks of meandering while lost at sea not knowing if he’d ever return home: The triumphant discovery of what he truly believed to be the land of India: The glorious return to Spain and hailed as a hero for discovering lands unknown to Europeans: The envy of the Spanish upper class nobles as they saw this lowly wool weaving peasant, a foreigner nobody, being rewarded with the titles of Admiral, Governor and even Viceroy.
It is truly an amazing and unbelievable “rags to riches” story used for centuries to inspire young and old all over the globe. How unbelievable is it to visualize?
Now what if you were shown that all that you just imagined is not true? What if you learned that Columbus was never lost, that he was not an ignorant wool weaver but a scholar and genius pilot in his day? That his own notes show he never believed to have reached the real India. That he was instead involved in a treacherous spy-game against Spain and that his name was not Columbus at all! Would you want to find out exactly how the unbelievably incorrect history you were taught came to be?
I know hearing that the story surrounding the discovery of America taught for more than 500 years being wrong sounds bizarre and hard to swallow. That would mean the assertions taught every child from the time he or she enters school would have to be changed. But based on 20 years of systematic research in countries from Poland to the Dominican Republic - utilizing ancient manuscripts to modern DNA and forensic to genealogy - I claim just that.
When I immigrated to the United States at the age of twelve I never dreamed I would stumble across such proof tied to my native land, but in 1991 while translating a work from Portuguese to English, I began to see how Columbus didn’t just stumble across America by accident as he sought India but the voyage was part of an ingenious espionage plot to defraud his Spanish sponsors.
In fact, I now have enough proof to assert that the man who discovered America wasn’t a peasant, Cristoforo Colombo (Christopher Columbus), the wool-weaver from Genoa at all, but Prince Segismundo Henriques of Portugal, son of the self-exiled Polish king Vladislav III.
My two previously published books on this subject in Portugal were sellouts. My new book Colón. La Historia Nunca Contada (Columbus: The Untold Story) published in Spain is receiving lots of media attention from Spain to Argentina, soon a  worldwide publisher is bound to take the newly completed and updated English version, titled "COLUMBUS. The Untold Story," to the world.
This book will forever change how we view our history and so does Prof. Joaquim Veríssimo Serrão, PhD, Dean of the University of Lisbon, who wrote the Preface, as well as other experts in the field like Prof. Trevor Hall, PhD, Johns Hopkins University, Dr. Marcel Balla, PhD, Boston University, Prof. Manuela Mendonça, PhD, President of the Portuguese Academy of History…
“Another nutty conspiracy theory!” That’s what I first supposed as I started to read the manuscript… I now believe that if Columbus were alive and on trial by any fair civil court, he would be found guilty of huge fraud carried out over two decades against his patrons, wrote professor James T. McDonough, Jr., Ph.D. from Columbia University who taught at St. Joseph's University for 31 years.
Posted by Cristóvão Colon at 11:32 AM No comments: 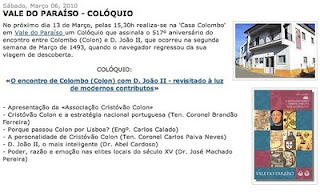