During its latest Hispanic Heritage Celebration on October 6, the NIEHS Diversity Council offered employees and contractors a novel perspective on explorer Christopher Columbus with a lecture by historian Manuel Rosa. Hosted by council member and NIEHS biologist Eli Ney, Rosa's talk, "Unmasking Columbus," explored the topic of "Columbus, the who, what and where — his identity, his knowledge and his mission. 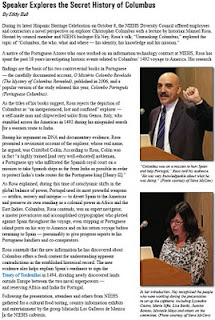 A native of the Portuguese Azores who once worked on an information technology contract at NIEHS, Rosa has spent the past 18 years investigating historic events related to Columbus' 1492 voyage to America. His research findings are the basis of his two controversial books in Portuguese — the carefully documented account, O Mistério Colombo Revelado (The Columbus Mystery Revealed), published in 2006, and a popular version of the study released this year, Colombo Português-Novas Revelações (Portuguese Columbus-New Revelations).

As the titles of his books suggest, Rosa rejects the depiction of Columbus as "an inexperienced, lost and confused" explorer — a self-made man and shipwrecked sailor from Genoa, Italy, who stumbled across the Americas in 1492 during his misguided search for a western route to India.

Basing his argument on DNA and documentary evidence, Rosa presented a revisionist account of the explorer, whose real name, he argued, was Cristóbol Colón. According to Rosa, Colón was in fact "a highly trained [and very well-educated] nobleman, a Portuguese spy who infiltrated the Spanish royal court on a mission to take Spanish ships as far from India as possible in order to protect India's trade routes for the Portuguese king [John II].

As Rosa explained, during this time of cataclysmic shifts in the global balance of power, Portugal used its most powerful weapons — artifice, secrecy and intrigue — to divert Spain to the Americas and preserve its own standing as a colonial power in Africa and the East Indies. Columbus, Rosa contends, was an expert navigator, a master prevaricator and accomplished cryptographer who plotted against Spain throughout the voyage, even stopping at Portuguese island ports on his way to America and on his return voyage before returning to Spain — presumably to give progress reports to his Portuguese handlers and co-conspirators.

Rosa contends that the new information he has discovered about Columbus offers a fresh context for understanding apparent contradictions in the established historical record. The new evidence also helps explain Spain's readiness to sign the Treaty of Tordesillas  in 1494, dividing newly discovered lands outside Europe between the two naval superpowers — and reserving Africa and India for Portugal.
http://www.niehs.nih.gov/news/newsletter/2009/november/inside-columbus.cfm

Posted by Cristóvão Colon at 8:09 AM No comments:

Take a look at Ptolemy's Geography published in Europe 1478. Columbus owned a copy of this very book.

"... Cristóbal Colón was a highly knowledgeable man for his time. He possessed various books on various themes, and some are of extreme importance to anyone who wants to investigate his life, such as the book of Marco Polo and Ptolemy’s book of geography. 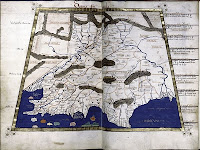 In his book, Columbus Then and Now: A Life Reexamined, Miles Davidson writes “Ptolemy’s Geographia became available in manuscript in Europe in 1409 and was first published in 1475, with five more editions up to 1492.” Cristóbal Colón owned the 1478 edition of the Geographia published in Rome. In this way one can establish that Cristóbal Colón, in 1478, knew at least as much about our world as Ptolemy knew 1300 years earlier and the discoverer, himself, informs us of this knowledge several times.
Dear Reader, were you not told that Cristóbal Colón was the first person to understand that the World was round? Reading through Colón’s writings, one can quickly dispel the false statement made by historians that “Cristóbal Colón was the first to realize that the earth was round and that if you sailed west you would reach the east.” Cristóbal Colon tells us clearly during his account of the third voyage that:
I always read that the world, land and water was spherical ... that Ptolemy and all the others wrote ... by lunar eclipses and other evidence ... Ptolemy and the other wise men that wrote of this world believed it was spherical ... Plinio writes that the sea and land make all one sphere.(3)
As is evident, scholars in Ptolemy’s time understood that the world was a sphere and Pytheas of Massillia had already shown that the earth was a sphere five hundred years prior to Ptolemy.
From ancient times, mariners used the North Star or Polaris as a reference to determine their locations at sea and they sailed by degrees. These degrees are a reference to the 360 degrees of a circle and thus to the globe or sphere.
Since 360 degrees is a constant in any circle of the sphere, the only element that changes is the number of miles in each degree as we move away from the Equator to the poles. The largest circle is found at the Equator while the shortest circles are at the poles, (see Figure 1.2.).
Imagine that in the late 15th century the Portuguese experts had calculated the sizeof the earth to within four percent of its true size and yet at the same time a schooled navigator, as clearly Cristóbal Colón was, was incapable of making the same calculation. Cristóbal Colón lived in Portugal and navigated with the Portuguese for King John II, who called him ingenious and industrious.(5) Should we continue pretending that Colón, who utilized the same knowledge and sciences as the Portuguese navigators, would not know how to take these same measurements? Clearly he knew.
This must be the accepted and logical view for anyone who wants to be a realist. To think otherwise would be to keep promoting a fantasy of an ignorant and lost sailor."
(Translation extracted from Colón. La Historia Nunca Contada "Columbus. The Untold Story")

Posted by Cristóvão Colon at 11:48 AM No comments:

This Blog is meant to be utilized to further the discussion of the history behind the man we have come to know as Christopher Columbus. You may write in English, Portuguese or Spanish. Comments and posts off-topic will be deleted.