Haitian Shipwreck is not Columbus’s Santa Maria - A Response 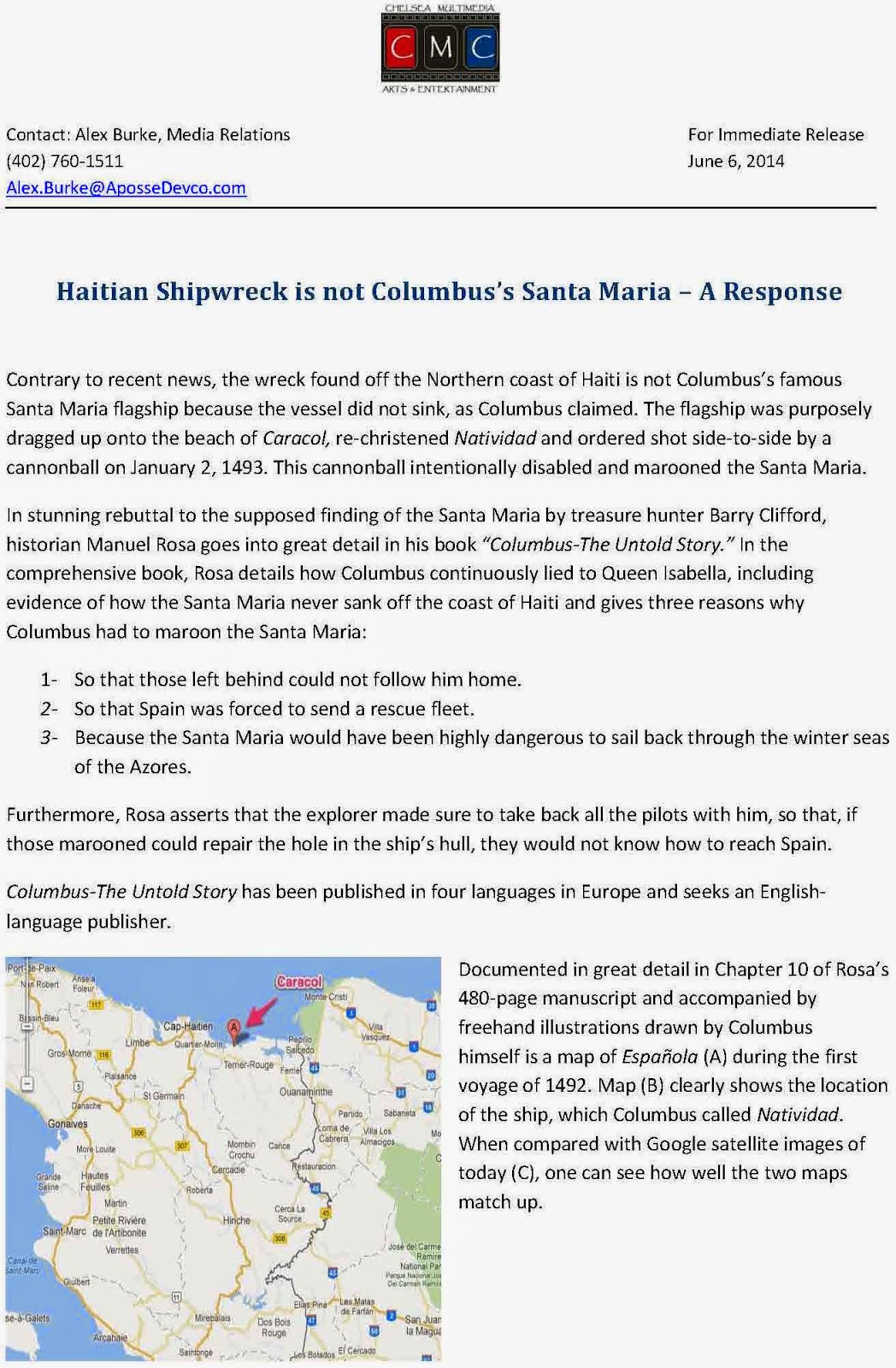 News claims that the shipwreck found off the Northern coast of Haiti is Columbus’s famous Santa Maria flagship are not accurate according to the documentation. 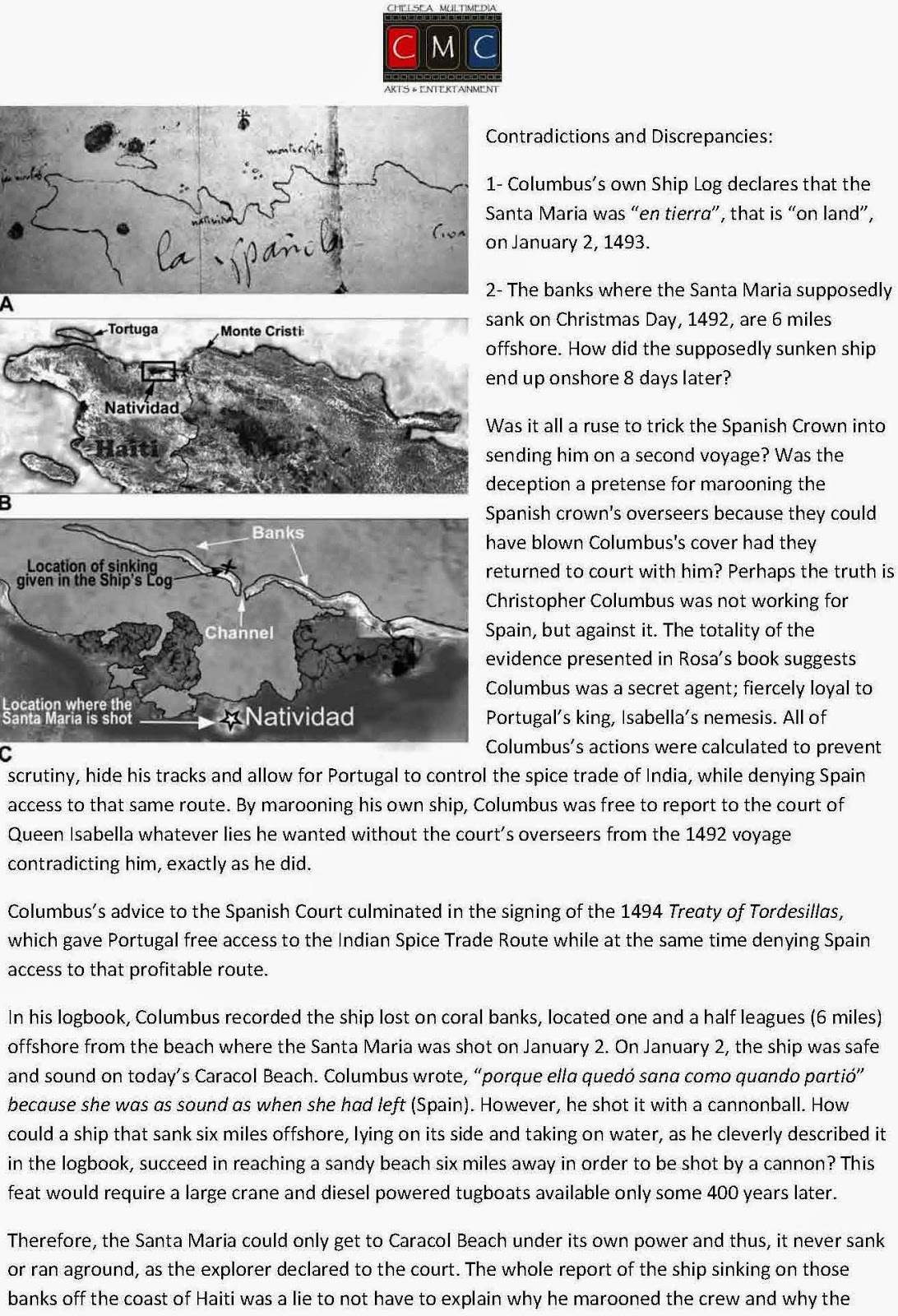 Contrary to recent news, the wreck found off the Northern coast of Haiti is not Columbus’s famous Santa Maria flagship because the vessel did not sink, as Columbus claimed. The flagship was purposely dragged up onto the beach of Caracol, re-christened Natividad and ordered shot side-to-side by a cannonball on January 2, 1493. This cannonball intentionally disabled and marooned the Santa Maria.
In stunning rebuttal to the supposed finding of the Santa Maria by treasure hunter Barry Clifford, historian Manuel Rosa goes into great detail in his book “Columbus-The Untold Story.” In the comprehensive book, Rosa details how Columbus continuously lied to Queen Isabella, including evidence of how the Santa Maria never sank off the coast of Haiti and gives three reasons why Columbus had to maroon the Santa Maria:
1- So that those left behind could not follow him home.
2- So that Spain was forced to send a rescue fleet.
3- Because the Santa Maria would have been highly dangerous to sail back through the winter seas of the Azores.

Furthermore, Rosa asserts that the explorer made sure to take back all the pilots with him, so that, if those marooned could repair the hole in the ship’s hull, they would not know how to reach Spain.
Columbus-The Untold Story has been published in four languages in Europe and seeks an English-language publisher. Documented in great detail in Chapter 10 of Rosa’s 480-page manuscript* and accompanied by freehand illustrations drawn by Columbus himself is a map of Española (A) during the first voyage of 1492. Map (B) clearly shows the location of the ship, which Columbus called Natividad. When compared with Google satellite images of today (C), one can see how well the two maps match up.


Contradictions and Discrepancies:
1- Columbus’s own Ship Log declares that the Santa Maria was “en tierra”, that is “on land”, on January 2, 1493.
2- The banks where the Santa Maria supposedly sank on Christmas Day, 1492, are 6 miles offshore. How did the supposedly sunken ship end up onshore 8 days later?

Was it all a ruse to trick the Spanish Crown into sending him on a second voyage? Was the deception a pretense for marooning the Spanish crown's overseers because they could have blown Columbus's cover had they returned to court with him? Perhaps the truth is Christopher Columbus was not working for Spain, but against it. The totality of the evidence presented in Rosa’s book suggests Columbus was a secret agent; fiercely loyal to Portugal’s king, Isabella’s nemesis. All of Columbus’s actions were calculated to prevent scrutiny, hide his tracks and allow for Portugal to control the spice trade of India, while denying Spain access to that same route. By marooning his own ship, Columbus was free to report to the court of Queen Isabella whatever lies he wanted without the court’s overseers from the 1492 voyage contradicting him, exactly as he did.


Columbus’s advice to the Spanish Court culminated in the signing of the 1494 Treaty of Tordesillas, which gave Portugal free access to the Indian Spice Trade Route while at the same time denying Spain access to that profitable route.
In his logbook, Columbus recorded the ship lost on coral banks, located one and a half leagues (6 miles) offshore from the beach where the Santa Maria was shot on January 2. On January 2, the ship was safe and sound on today’s Caracol Beach. Columbus wrote, “porque ella quedó sana como quando partió” because she was as sound as when she had left (Spain). However, he shot it with a cannonball. How could a ship that sank six miles offshore, lying on its side and taking on water, as he cleverly described it in the logbook, succeed in reaching a sandy beach six miles away in order to be shot by a cannon? This feat would require a large crane and diesel powered tugboats available only some 400 years later.

Therefore, the Santa Maria could only get to Caracol Beach under its own power and thus, it never sank or ran aground, as the explorer declared to the court. The whole report of the ship sinking on those banks off the coast of Haiti was a lie to not have to explain why he marooned the crew and why the court’s overseers did not return with him to Spain. It is only by locating the banks on a map, following details from the Ship Log, that one can clearly see Columbus’s deception.


One of the Santa Maria’s anchors, today in a Haitian museum at Port-au-Prince, was found at a plantation in Limonade, just 6 miles from Caracol. How could such a heavy anchor have floated to land from 6 miles offshore? Furthermore, the bell from the Santa Maria was found in 1994 off the coast of Portugal, near the ship San Salvador, which sank in 1555. Many puzzled over how the Santa Maria’s bell survived when the rest of the ship sank. The only answer is that the Santa Maria never sank, as Rosa claims to show. When the Haitian natives decided to burn the Santa Maria in late 1493, the bell survived because it was metal, and was recovered by Columbus upon his return to Natividad on November 28, 1493. The bell had been stored in Santo Domingo until it was shipped to Spain in 1555.


The fact remains that anyone looking for the Santa Maria in the ocean has not fully understood Columbus’s Ship Log, nor the ruse he was taking part in, and is wasting their time since the ship was left on land and was later burned to ashes by the natives. 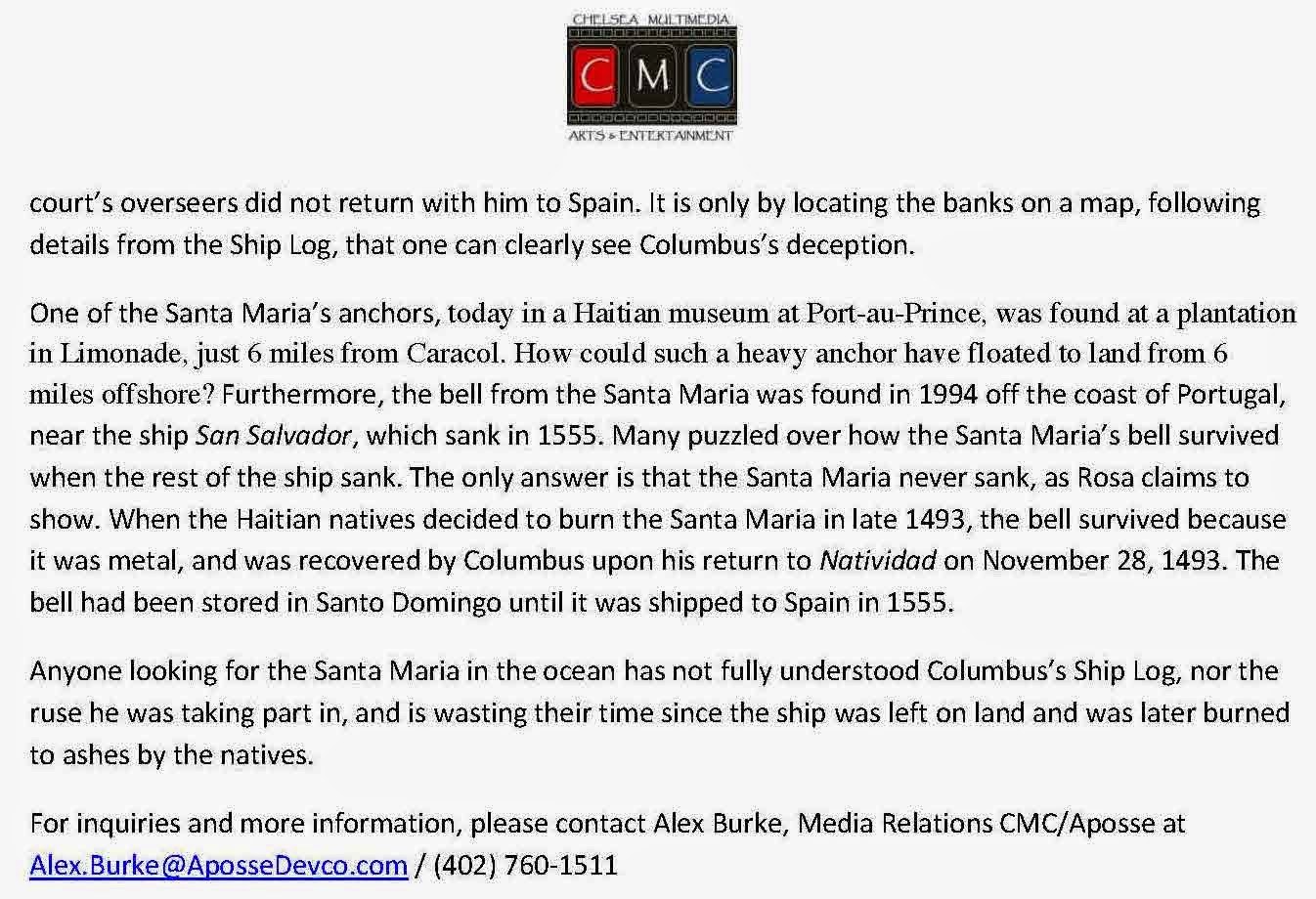