Who was Columbus? Xavier University Lecture, May 20

Who was Columbus?
The untold story – was Columbus not Italian but of Polish Royalty?
Dinner with Manuel Rosa 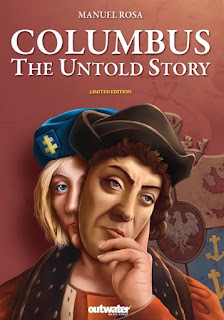 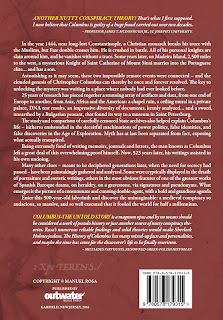 Join us for dinner and discussion with Manuel Rosa, author of COLUMBUS- the Untold Story.

Christopher Columbus's origins have long been shrouded in mystery for be utilized an assumed identity in Spain and continuously hid and lied about his past. Schoolbooks teach that the navigator was a poor Italian from a Genoese family of peasant wool weavers. Over the centuries there were claims that Columbus was a native of Greece, Spain, France, Scotland and even Jewish but according to new evidence, Columbus was none of the above for he hailed from Polish royalty.

Hear the latest evidence from Columbus expert Manuel Rosa, author of COLUMBUS. The Untold Story, who has spent 25-years investigating historical documents in various countries and bas unearthed unknown facts which are turning the Columbus history upside-down. "Our whole understanding of Christopher Columbus has for 500 years been based on misinformation. We couldn't solve the mystery because we were looking for the wrong man, following lies that were spread intentionally to bide his true identity," Mr. Rosa told The Daily Telegraph.

Rosa will present new insights into ulterior motives for the epic 1492 voyage across the sea. Columbus was not in search of the real India at all, but was acting as a double-agent with the secret mission of taking the Spanish crown, Portugal's only European enemy, as far away from India as possible. In this secret mission, the navigator was a true James Bond whose successful lie of America being India managed to fool the world for five centuries.

Manuel Rosa is a Portuguese-American historian and author who emigrated from the Azores to Boston in 1973. A graphic artist working for Atlantic Monthly and Boston Magazine, he became an IT Professional with Lockheed Martin and now works at Duke University. Mr. Rosa has lectured at European and American universities, has advised UNESCO and the Haitian government on matters related to Columbus, bas appeared on BBC, the Travel Channel's Expedition Unknown, on NPR, and many other media and foreign language documentaries.

Join us for a stimulating and entertaining evening about world history that you won 't want to miss.

Order your copy now at www.Columbus-Book.com
before it's sold-out! Durham, NC, May 16, 2016 --(PR.com)-- Generations of schoolchildren have been taught the archetypal story of an Italian, peasant wool-weaver’s son who discovered the New World in 1492. Depicted as a man of little knowledge, a clueless navigator, and a bumbler of legendary stubbornness – refusing to admit he'd never reached India – "Columbus" has long been seen as a model visionary, a near-mythical figure who exemplifies why one should never give up on one's dreams, however misguided they may be.

This and much else that's generally believed about the world's most famous explorer can now be dismissed as bunkum.

Over recent decades, a mass of data has been assembled from widespread and disparate sources, inferences pieced together, and an argument constructed that's as persuasive as it is fascinating and astonishing.

Like the proverbial train wreck in slow motion, paradigm shifts in how the world understands major events and personalities appear explosive in hindsight only. As history and human awareness actually run their course, any major insight – and the scrutiny that led to its occurrence, especially when the insight transcends deeply held beliefs – will almost always face irrational resistance from the guardians of respectable conventionality. As a rule, the wave of change enters mass consciousness some time after the quantum shift in Received Opinion has occurred.

So it is with the explosion of the "Christopher Columbus" myth – built up by long accretion to this faulty rendering of "Cristóbal Colón," itself the pseudonym of a controversial, almost sphinx-like man who really did make those famous, trans-Atlantic voyages – but whom history so far has represented in a manner that could scarcely be more at odds with what the facts now show. According to Manuel Rosa, the world's foremost authority on "Christopher Columbus," not only was the immortal navigator of royal blood, but the Catholic Monarchs of Spain – whom "Columbus" adroitly deceived for more than twenty years – participated in a far-flung conspiracy to hide his true identity.

"Considering the sheer number of people who've been misled," says Rosa, "the audacious scope of the original deception, the magnitude of the misapprehensions that gathered around it over time, and the fact that it's taken half a millennium for the real identity of 'Columbus' to emerge, his real achievement was beyond doubt one of the most extraordinarily successful, double-agent spy missions in all of history."

Rosa is not alone in this radical revisionism. Distinguished maritime historian João Abel da Fonseca says, "The evidence Rosa presented is so plentiful that one merely needs to enumerate it to come to this obvious conclusion. Columbus' high nobility birth is an issue that is no longer worth wasting our time debating."

No less an authority than Manuela Mendonça, President of the Portuguese Academy of History, has publicly affirmed that, "Columbus was a Portuguese-born noble belonging to the house of Viseu."

The nucleus of this very complex and broad-based argument appeared ten years ago, when Rosa's first book – the 640-page O Mistério Colombo Revealdo (The Columbus Mystery Revealed) – came out in Portuguese. Over the next few years, highly acclaimed translations appeared in Spanish, Polish and Lithuanian.

"This book . . . will, with absolute certainty, be talked about for a long time," says University of Valladolid Professor D. Felix Martinez Llorente.

With nearly 200 pages of stunning new material, the special, limited edition that's being released this month – for the first time in English – promises to be another, enduringly provocative conversation piece.

On May 20th, to commemorate the 510th anniversary of "Columbus’" death, Manuel Rosa will present a lecture, "Who Really Was Columbus?" at Xavier University in Cincinnati, Ohio. The event includes a reception, dinner, and discussion following the lecture.

In case you're unable to attend, while supplies last, you may still order Columbus: The Untold Story through Amazon – or directly from its New Jersey sponsor, Nowy Dziennik, Polish Daily News.
columbusbook.blogspot.com

About The Author: Manuel Rosa is a Portuguese-American, investigative historian and author who emigrated from the Azores to the Boston area in 1973. He currently lives in North Carolina and works at Duke University’s Cancer Institute.

Rosa has spent a quarter century investigating America's legendary "discoverer." He has authored five books on Columbus in several languages other than English and has appeared on BBC, NPR, the Travel Channel's "Expedition Unknown," and numerous foreign-language media. His work was featured on the cover of Newsweek's Polish subsidiary in 2011.

Mr. Rosa has advised UNESCO and the Haitian government on matters related to Columbus' lost ship, the Santa María. He has lectured on Columbus at American and European universities.
Posted by Cristóvão Colon at 11:37 AM