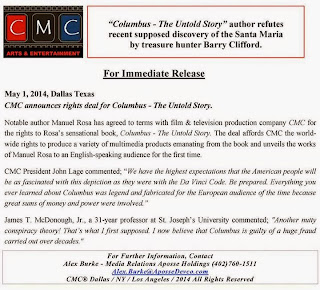 Notable author Manuel Rosa has agreed to terms with film & television production company CMC for the rights to Rosa’s sensational book, Columbus - The Untold Story. The deal affords CMC the world-wide rights to produce a variety of multimedia products emanating from the book and unveils the works of Manuel Rosa to an English-speaking audience for the first time.
CMC President John Lage commented; “We have the highest expectations that the American people will be as fascinated with this depiction as they were with the Da Vinci Code. Be prepared. Everything you ever learned about Columbus was legend and fabricated for the European audience of the time because great sums of money and power were involved.”

James T. McDonough, Jr., a 31-year professor at St. Joseph’s University commented; "Another nutty conspiracy theory! That’s what I first supposed. I now believe that Columbus is guilty of a huge fraud carried out over decades."