"The Secret Identity of Columbus: Peasant to Viceroy in 33 days"

Will Christopher Columbus's picture soon adorn the walls of many Lithuanian-American, Polish-American, and Portuguese-American institutions as well as private homes of people of this background?
Henryk Skwarczynski wrote in his introduction to Manuel Rosa's book "KOLUMB. Historia Nieznana" just published in Poland and earlier in Spain and Portugal that in Central Park, New York, there are monuments to King Jogaila and his grandson Christopher Columbus but the world is unaware of these family ties. Can this be true?
These questions and their answers lead directly to Duke University in North Carolina where after more than twenty years of investigations author Manuel Rosa has come up with the most stunning findings about Columbus. Manuel Rosa is the first historian to present new documents that for 500 years had been overlooked by historians all over the world!
Born in 1961 Manuel Rosa is an American historian who emigrated from the Azores, Portugal, to the Boston area in 1973 with his parents. For many years he has investigated the contradicting facts pertaining to the man credited with the discovery of America. 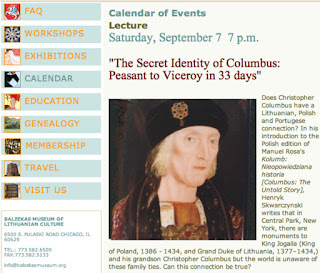 The results of his research are flabbergasting! The turning point for publicizing his findings was an article published on November 28, 2010 in the British "Daily Telegraph" (the same which reported the discovery of Troy by Heinrich Schliemann!) where its correspondent Fiona Govan reported from Madrid about Manuel Rosa's book Colon: La Historia Nunca Contada - (Columbus: The Untold Story), published in Spain.
The news quickly spread all over the globe. "Mamma Mia!" exclaimed New York Daily News Staff Writers Corky Siemaszko and Christine Boyle, "New research suggests the man credited with discovering America was actually the son of exiled Polish King (from the Lithuanian Jagiellonian dynasty) Vladislau III - and not the son of a humble craftsman from Genoa... the Genoese wool-weaver is a fable".
Soon after that information was repeated by Moscow TV and many other media. Manuel Rosa claims to have proved that a last will dated 1498 in which Columbus wrote "being I born in Genoa" (quoted by many authors as a proof of Columbus origin) was forged 80 years after his death by Italians with the name Columbo who wanted to lay claim to his inheritance.
Mr. Rosa participated in the DNA studies of Columbus's bones at the University of Granada and has presented the findings of his investigations at numerous Portuguese, US and Spanish universities, at the Portuguese Air Force Academy and at the prestigious Sociedade de Geografia de Lisboa.

The author's of these sensational findings lecture at the Portuguese Academy of History, on May 16, 2012, was full to capacity of the scientific community who described Mr. Rosa's history--changing research as "a serious look at the truth, well-substantiated and worthy of praise".

"A completely new face of Christopher Columbus is emerging from a book published in Polish by Portuguese historian Manuel Rosa, who believes that the discoverer of America was the son of the Polish king for the Jagiellonian dynasty, Vladislau III of Varna," - the Polish Newspaper Gazeta Prawna.